What is a periodic table? 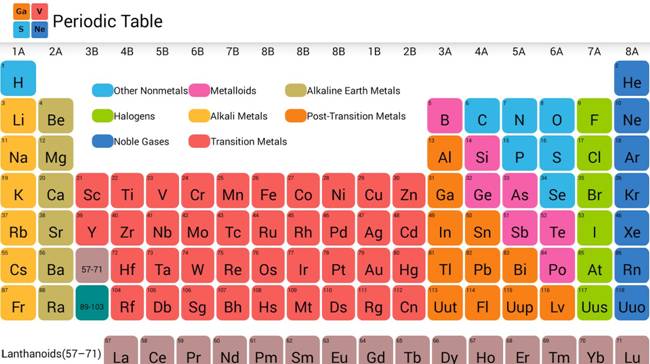 The periodic table we use today is based on the one devised and published by Dmitri Mendeleev in 1869.Mendeleev found he could arrange the 65 elements then known in a grid or table so that each element had:
A higher atomic weight than the one on its left. For example, magnesium (atomic weight 24.3) is placed to the right of sodium (atomic weight 23.0):

Mendeleev realized that the table in front of him lay at the very heart of chemistry. And more than that, Mendeleev saw that his table was incomplete - there were spaces where elements should be, but no-one had discovered them.
Just as Adams and Le Verrier could be said to have discovered the planet Neptune on paper, Mendeleev could be said to have discovered germanium on paper. He called this new element eka-silicon, after observing a gap in the periodic table between silicon and tin:

Similarly, Mendeleev discovered gallium (eka-aluminum) and scandium (eka-boron) on paper, because he predicted their existence and their properties before their actual discoveries.
Although Mendeleev had made a crucial breakthrough, he made little further progress. Mendeleev believed, incorrectly, that chemical properties were determined by atomic weight. Of course, this was perfectly reasonable when we consider scientific knowledge in 1869.
In 1869 the electron itself had not been discovered - that happened 27 years later, in 1896.In fact, it took 44 years for the correct explanation of the regular patterns in Mendeleev's periodic table to be found.

Groups in the Modern Periodic table

There are 18 vertical columns called groups.
Each group consists of elements having the same electronic configuration.
Some groups have a collective name.

Periods in the Modern Periodic Table

There are 7 horizontal rows called periods. These are numbered as 1,2,3,4,5,6,7 from top to bottom.  A period indicates the value of ‘n’(principal quantum number) for the outermost or valence shell.

Locating the position of an element in the Periodic Table

What is Periodicity?
If we go back to the Modern Periodic law, we see that when the elements are arranged in the order of their increasing atomic numbers, it is observed that the elements of similar properties recur at regular intervals or periodically. This is called periodicity in the properties of elements.
In chemistry periodicity of elements means the recurrence of similar properties of the elements after certain regular intervals when they are arranged in the order of increasing atomic numbers.
Cause of Periodicity of Elements

The period table is a system for organising and categorising all of the elements found in chemistry. Elements cannot be broken down further by any chemical reactions and is an atom with the same number of protons as electrons, so the period table can be thought of as a list of the basic units of chemistry.

Although it functions as a list, the period table contains a great deal of useful information about the nature of each element. The organisation of the period table allows predictions about the way in which different elements will behave, based on their location in the table. This predictive function helped to promote atomic theory and allows schoolchildren and researchers alike to consider the relationships between different elements and the ways in which their behaviour is dependent on the movement of electrons and their atomic mass. 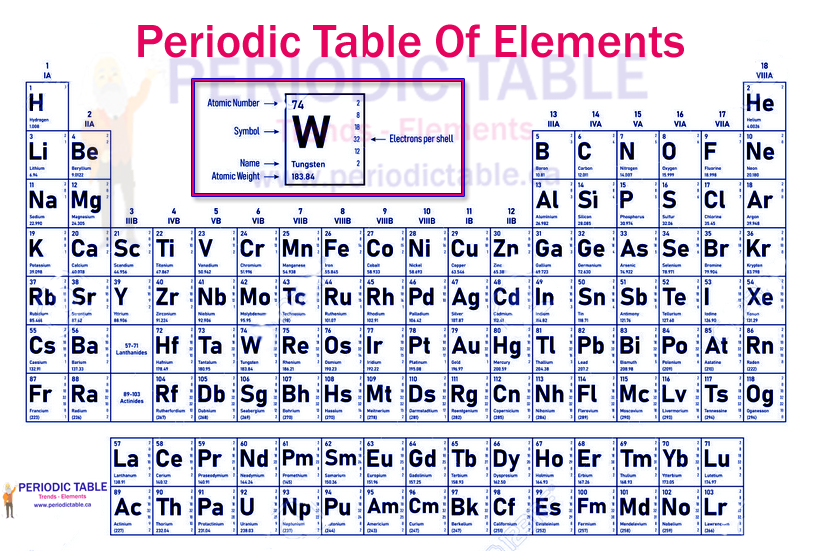 History of the periodic table

All responsible lenders will need to ensure that they have successfully verified the information you have sent them. Once this has been done and the lender has accepted your application, they will send you the full terms and conditions. The periodic table in its current format predates our understanding of atoms, and the discovery of protons, electrons and neutrons. It was originally formulated based solely on the observations of scientists about the reactivity and characteristics of the elements found occurring naturally in the world.

In 1789, a chemist by the name of Antoine-Laurent de Lavoisier attempted to list the elements currently known in the world. He gave a working definition of an element, as a substance that could not be broken down into a simpler substance by the use of chemistry. These included oxygen and hydrogen, as well as many others. Lavoisier didn’t just list the elements, however. He also made the first attempt to categorise them as gases, metals, non-metals and earths.

In the early 1800s, researchers began to notice that some of these elements had strong similarities to each other. They would behave in similar ways when combined with other elements and there was a noticeable relationship between their atomic weights (the weight of a single atom of the element). These were initially combined into groups of three similar elements, known as triads, by Johann Döbereiner.

Subsequent chemists started to arrange the elements they were attempting to categorise by atomic weight, and started to notice that there was a pattern of similar reactivity which occurred approximately every seven or eight elements. Alexandre Béguyer de Chancourtois was the first to publish a system of categorising the elements which showed this repeating pattern (known as periodicity) in 1862. This was a three-dimensional arrangement and the period the length of the repeating cycle) used was 16, rather than 8 as we now know to be correct.

In 1865, John Newlands noticed that the period could be seen as 7, rather than 16. The use of seven, rather than eight, was because the noble gasses, which occupy the right hand side of the modern periodic table had not yet been discovered. Newlands created a table based on his observations, but attempted to force his structure on the elements that had been discovered, including two elements in a single box and not leaving any space for as-yet undiscovered elements. This attempt to impose structure on the chemical world, rather than working to reveal the structure inherent in the elements themselves, ultimately doomed Newland’s attempt to gain recognition for his discovery and the modern periodic table is generally attributed to Dmitiri Mendeleev.

Mendeleev published his “Periodic System” in 1869. He is rumoured to have devised the system as the result of playing ‘element solitaire’ whilst on train journeys. Although he started to create his system based on the atomic weights of the various elements, he quickly noticed that certain properties recurred in a predictable pattern. Rather than adhere rigidly to a system based on atomic weights, Mendeleev switched to using the properties of the elements as the decisive factor in where an element should be placed. This sometimes meant that an element with a lower atomic weight might be placed after one with a higher atomic weight, because the properties and reactivity it displayed made it more appropriate in this position.

In addition to using the properties of the elements as his guiding principle, Mendeleev also allowed spaces for elements that had not yet been discovered. He even predicted the atomic weight, density, melting point and compounds (such as oxides) of several of these ‘missing elements’. Over the next two decades, some of these elements were indeed discovered and their properties were remarkably similar to those predicted by Mendeleev. 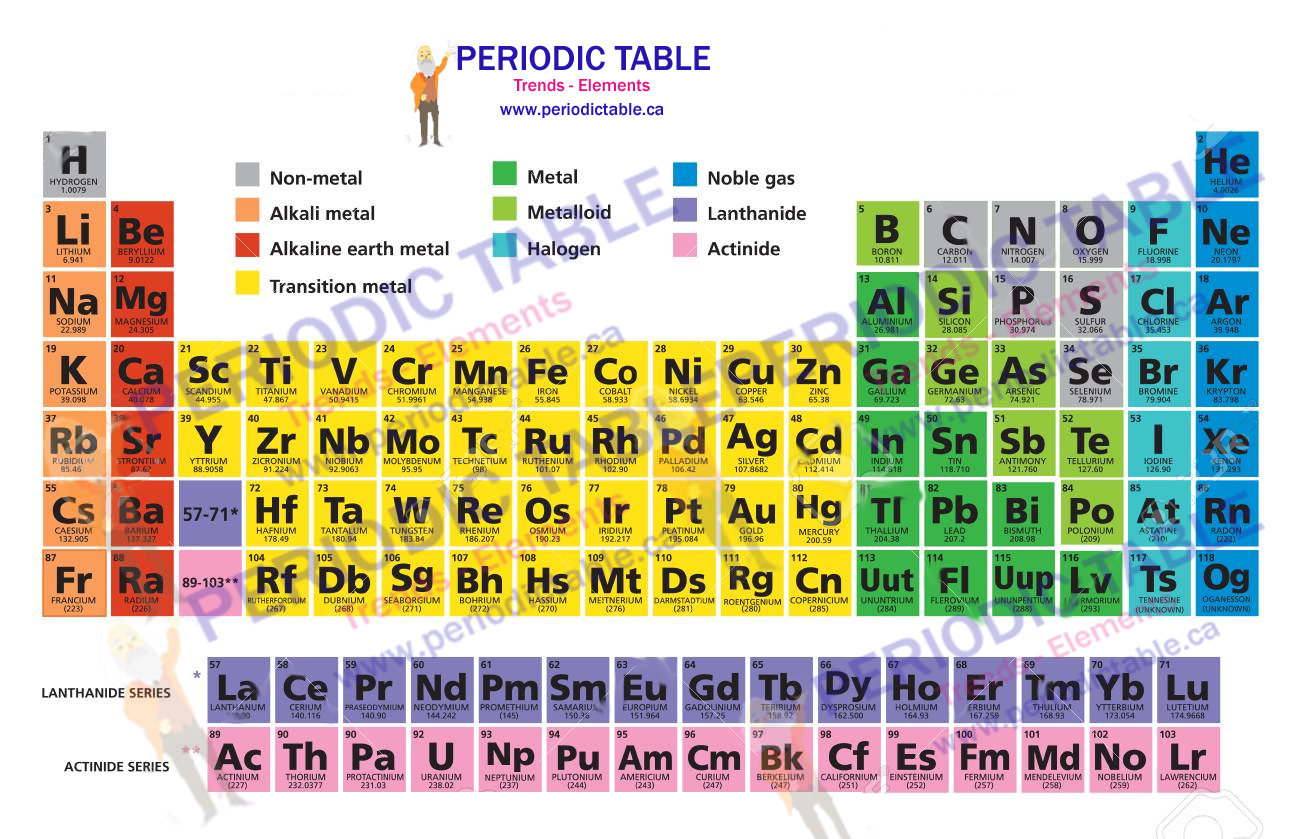 Not all of the undiscovered elements were predicted by Mendeleev, however. When the noble gases were discovered during the 1890’s, there was no ready-made space for them to occupy in the periodic table as it stood then. Mendeleev realised that these elements actually formed a group in and of themselves, and they made the final column of his table. This led to the understanding of the periodicity of the table should be 8 rather than 7 and completed the basic structure of the periodic table. Each element now had a number based on its position in the table. This number is known as the atomic number of the element and it can be used to predict the behaviour of the element.

Although the basic classification system of the periodic table has been largely unchanged in over 100 years, we have come to understand more about the reasons behind the patterns and behaviour that can be seen. In 1913, Henry Moseley found that he could use X-rays to find the atomic number of each element. This demonstrated that the atomic number wasn’t simply a construct of Mendeleev’s periodic system, but actually reflected something in the structure of the element. During the 1920s, atomic theory was developed, allowing scientists to understand that the atomic number was actually the number of protons an element possessed. This gave a final validation to the periodic table in its current format and highlighted the accuracy and inspiration of Mendeleev in its creation.

In more recent years, two additional groups have been added to the periodic table, the lanthanides and the actinides. These are an integral part of the table, but are usually displayed in separate rows beneath the main body of the table. This is for a number of reasons. The first is that these elements are rare, often synthetic or radioactive and have not received anywhere near as much study as the other elements which have been known for hundreds or even thousands of years. This means that scientists know far less about them and their properties, meaning that it is useful to have them separated for clarity. Additionally, there are many of these elements and adding them into the format of the normal table would lead to the table becoming very wide and it being difficult to print or to examine. As a result, these two sets of elements are usually kept separate from the rest of the periodic table.