The periodic table is a way of categorising elements in order to help scientists and researchers.  The organisation of the periodic table is based on the structure and nature of atoms of each, individual single element.  Because the periodic table of elements is only looking at single elements, and not compounds, it is based on when the element is not in an ionic form, meaning that it has the same number of electrons as protons.  This balance in the number of protons and electrons means that the atoms are balanced, and therefore carry almost no electrical charge.

Almost all of the elements in the periodic table of elements are capable for forming ions, however, and their position on the periodic table allows scientist to predict how they will do this.  Ions are formed when an atom (which was previously electrically neutral) either gives up some of its electrons, or gains some electrons from other atoms.  This occurs to fill electron shells.  Ions are atoms that carry an electrical charge.  Those which are positively charged are known as cations, and those with a negative charge are anions. 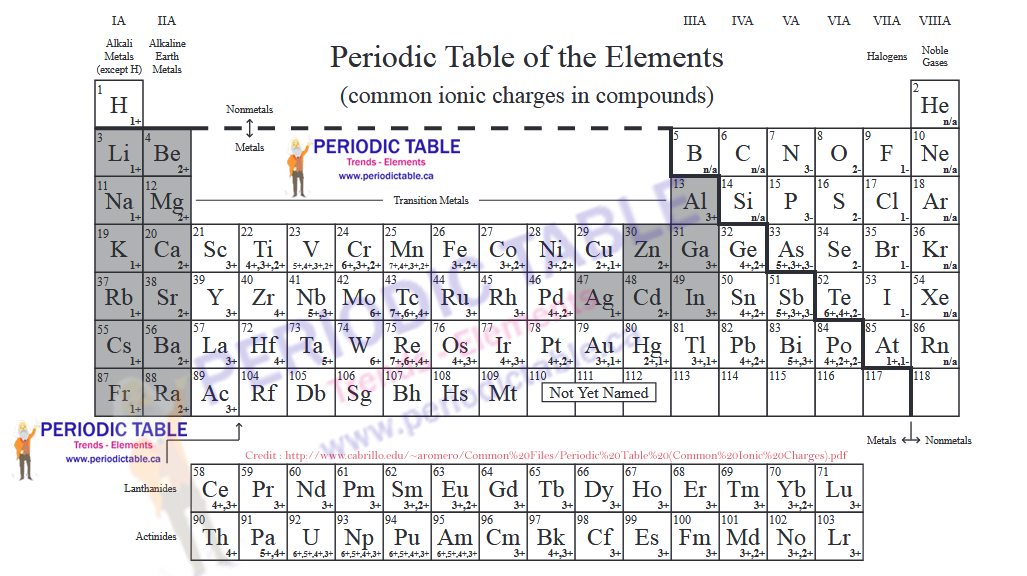 Electron shells are areas around the nucleus of an atom which are occupied by electrons.  Although atoms are electrically stable in their base form, where they have the same number of protons and electrons, atoms will also react to form complete electron shells.  When a substance has a full outer electron shell (this shell is known as the valence shell), it becomes stable and is unlikely to react.  Some elements in the periodic table of elements are stable, in that they have full valence electron shells and are, therefore chemically inert.  These are known as the noble gases.

If an element is in ionic form, it has donated (given up) or accepted electrons.  This will have filled (or emptied) an outer valance electron shell.  If a valance electron shell is emptied, it ceases to exist (from a chemistry perspective) and the next shell in becomes the valence shell. The number of electrons it will take to fill the valence electron shell is known as the ‘charge’ of an elemental ion.  If the atom has lost one electron, it has a positive charge (because it has more positively charged protons than it does negatively charged electrons) and thus is can be thought of as having a +1 charge.  If the atom has to lose three electrons, it will have a charge of +3.

The Periodic Table of Elements Provides Information on Ionic Charges

Elements in group 8 are the noble gases.  These have full valence electron shells, meaning that they do not form ions.  They are considered stable elements.

Some Elements Can Have Multiple Different Ionic Charges

Although it is usually possible to estimate the charge an ion will have based on the number of valence electrons, this is not completely guaranteed.  Some elements can have ions with different charges, for example copper can have ions with a +1 or a +2 charge.

The most common elements to have variable charges are the transition metals.  These elements can lose electrons easily, forming different ions.  Although many of the transition metals can have a wide range of charged ions, some are much more common than others, simply because they are the most stable.