The periodic table of elements (often shortened to just ‘the periodic table’) is one of the most iconic images of the sciences, particularly chemistry.  It is a visual categorisation of the individual elements into rows and columns based on their chemical properties and electron structure.  The organisation of the periodic table of elements allows scientists (and science students) to predict how an element will look and behave.  It was first suggested in its current format in 1869 and, although many elements have been added since, the fundamental rationale, structure and layout has remained the same since then. 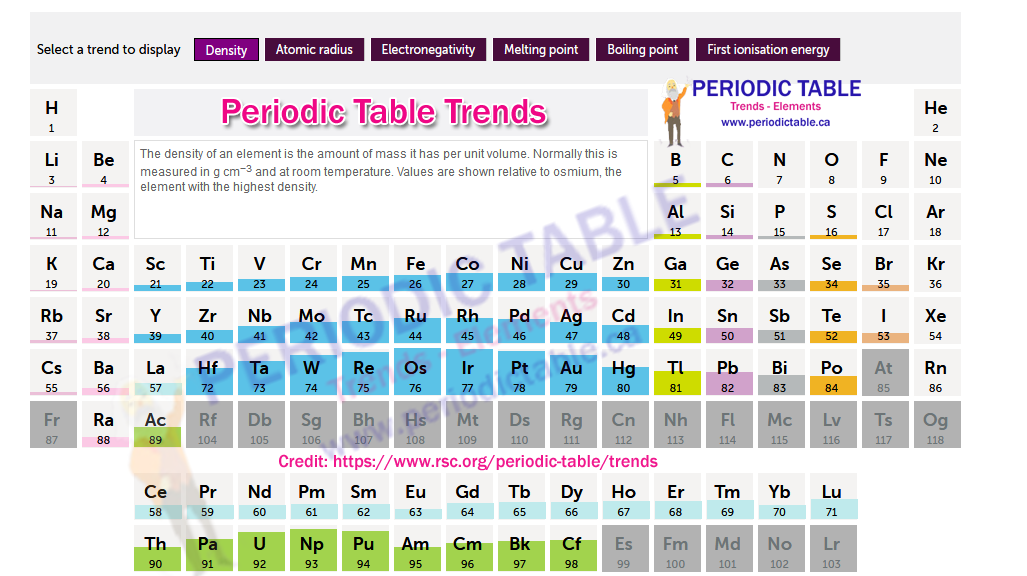 Trends across groups within the periodic table

As already mentioned, groups within the periodic table of elements share many characteristics.  The most important of these is reactivity.  This is a measure of how easily the element forms combinations (known as compounds) with other elements.

Trends across periods within the periodic table

Periods also have some characteristics and there are patterns as you move down the periodic table of elements as well.  As the period increases, the elements have increasing numbers of protons.  This means that an atom of hydrogen in group 1 period 1 has only one proton, whilst an atom of rubidium in group 1 period 5 has 37 protons.  Because an atom has the same number of electrons as it does protons, this means that the atom of rubidium in period 5 has 36 more electrons than hydrogen in period 1.  These 36 electrons form complete shells, meaning that they don’t have as much of an impact on the reactivity as the valence electrons in the outermost shell but they increase the distance of the valence electrons from the protons and neutrons in the nucleus (centre) of the atom.  This means that the electromagnetic forces holding the valence electrons in place in elements in period 5 are weaker than those in period 1, making it easier for the atom to lose electrons, but harder for it to gain them.  If the most common way for the element to react is to lose an electron (for example, metals) then the reactivity will increase as you move down the group.  If the atom needs to gain an electron to react (as is true of most non-metals) the opposite will be true, meaning that non metals in period 1 are more reactive than those in period 5.